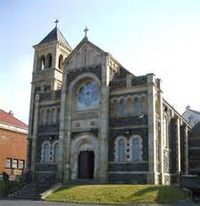 MASS FOR THE ELEVENTH SUNDAY IN ORDINARY TIME

St Mary's Star of the Sea Church, The Crescent, Portstewart 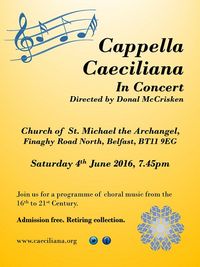 Cappella Caeciliana presented a programme of music for a summer evening, which was part of the celebrations of the 40th anniversary of St. Michael the Archangel Parish, and was also the last concert in the choir's 20th anniversary season.

MASS FOR THE FEAST OF PENTECOST

Cappella Caeciliana sang at Mass for the Feast of Pentecost.  This formed part of the celebrations of the reopening of St Bernadette's Church after extensive renovation and refurbishment, which culminated with the official reopening of the Church by Bishop Noel Treanor two weeks later on the Feast of Corpus Christi.